How to Make Excellent Edibles With Rosin Chips or Pucks 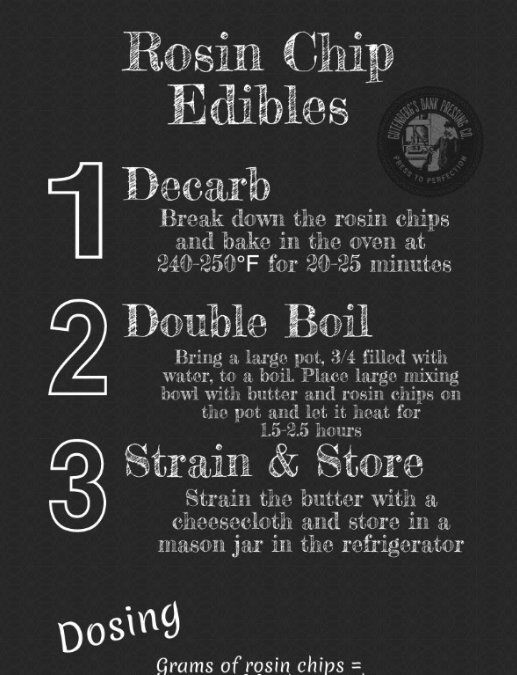 What are Rosin Chips?

As the art of rosin pressing continues to grow in popularity, the number ways the materials are being used increases as well. Ingenuity has shown the rosin pressing community that we can ‘use all parts of the buffalo’ and do more than just press the rosin, throw away the rosin bag, and call it a day.

To press rosin, either cannabis flower or hash is placed inside a rosin bag. These bags are fine mesh nylon bags with holes in the micron sizes (one millionth of a meter). Via a rosin press, heat and pressure is applied to the bag. This squeezes the cannabis concentrate out of the mesh rosin bags leaving behind plant material from the flower. The flattened cannabis inside the rosin bag post-press is known as a rosin chip or rosin puck. Rosin chips can have some cannabinoids left and could be used in several ways. In this article, we will talk about using your rosin chips to make some cannabutter or cannabis coconut oil. Time to make some edibles!

There are just a few things you will need to make your very own rosin chip oil/butter. First and foremost, you’ll need some rosin chips. Since rosin chips have already been pressed, the amount of THC and other cannabinoids in the remaining flower is much less. Therefore you will have to use more weight in rosin pucks to achieve the same potency as using fresh cannabis flower.

To fully activate the THC, the rosin chips need to be decarboxylated, necessitating the need for the baking sheet. Once decarbed, it is time to infuse, and for this you will need a large pot to boil water and a large mixing bowl to sit above the water and act as a double-boiler.

Inside the large mixing bowl will be a mixture of your rosin chips and some butter or coconut oil. Once infused, you will need the cheesecloth or a fine strainer to separate the butter/oil from the rosin chips. Finally the infused butter/oil is stored in an airtight mason jar and awaits use in some delicious edibles. Here is a list of ingredients and supplies:

Dosing your edibles can be a bit tricky, but using rosin chips adds another element of uncertainty because the flower has already been squeezed for its cannabinoid extract. We suggest using about 4x more rosin chips, by weight, than you would cannabis flower. So, if you usually use a half ounce of cannabis flower, you will need 2 ounces of rosin chips to achieve the same potency. Here is an a formula to use and an example below:

P = potency of each edible

F = potency of the flower used

Pro Tip: Use a bit more butter/oil than is called for just incase of all spills or loss

Decarboxylation (decarbing) is the process of applying heat to cannabis to activate the THC. Activating the THC (or other cannabinoids) means changing the compound, THCa (tetrahydrocannabinolic acid), into THC with the use of heat. This step is debatable among rosin chip edible makers because the rosin press already applied heat to the flower during the press. Therefore there is a danger of applying too much heat and burning away the THC.

To decarb safely and efficiently, break the rosin chips up into smaller pieces using your fingers and spread the pieces out on your baking sheet. Place the baking sheet in the oven at 240-250℉ for 20-25 minutes. Now you are ready to infuse the rosin chips into your butter/oil.

Double boiling is using the heat from a boiling liquid to heat up another liquid or compound. In this case, boiling water is used to heat up butter/oil and infuse it with the cannabinoids from the rosin chips. Fill the large pot about ½ to ¾ full with water and bring it to a boil. The lower the temperature a bit to retain a strong simmer. Place the butter/oil in the large mixing bowl and place that bowl on top of the large pot containing the boiling water. The large mixing bowl should sit on the inside edge of the large pot.

Using a cheesecloth or fine strainer, strain the rosin chips from the butter/oil into a mason jar or another airtight container. This may take a few strains to completely get all the rosin chips out from your butter/oil.

With your butter/oil strained and in the mason jar, put a lid on it and put it in the fridge. Now your rosin chip cannabis butter/oil is ready for use!

Potency per brownie when using 12 grams of rosin chips: Approximately 37.5 mg per brownie

Other Ways to Use Rosin Chips

Besides making butter/oil there are a couple other ways you can reuse your rosin chips. For one, you can smoke them. Afterall it is just flat cannabis flower. Remember, the potency of the flower is greatly diminished as a result of the press squeezing out all the cannabinoids, so do not expect to get super baked from the same amount you may normally smoke.

Instead of smoking the rosin chip, you may choose to repress it and give it a final squeeze. The small amounts of cannabinoids left in the flower, when repressed, may provide you with a bit more rosin! Happy pressing!