The Art of Cold Start Dabbing 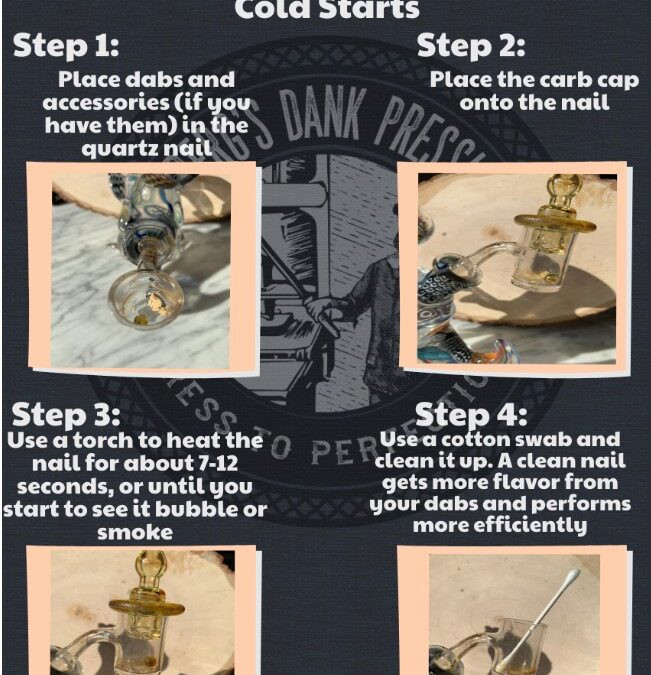 When visiting your local dispensary, recreational store, or friend’s living room, you may encounter a more potent version of cannabis flower many refer to as dabs. Dabs are a concentrated version of the cannabinoids that make up the cannabis plant. Cannabinoids are the active parts of marjuana and hemp. Along with over 140 other cannabinoids, THC and CBD are the two most popular. Levels of THC and CBD can reach upwards of 85% purity when you get it in concentrate form. Dabs also contain terpenes, which is where the flavor comes from. As we are about to find out, dabs can come in many forms. You can also use traditional dabbing or cold start dabbing to consume. Let’s get into it!

The Different Types of Dabs/Concentrates

Butane Hash Oil (BHO) concentrates are extracted from the cannabis flower with the use of butane (or another solvent). The butane, when passed through the cannabis, picks up the concentrated cannabinoids like THC & CBD. The butane is then evaporated leaving behind the ‘dabs’. Many dabbers enjoy BHO products because the price is reasonable and the taste can be very enjoyable. Some turn away from BHO for a number of reasons. Butane extractions can be costly to produce and to have the right equipment. Butane also presents a safety hazard because of its high-flammability. There is also the chance of having residual solvents in the end product when done properly.

Diamonds and sauce have crystallized THCa formations that become separated from the saucey terpenes. By leaving the extract in a dark place to separate over time, extractors can achieve close to 100% THCa crystals with a really appealing terpene profile in the sauce.

Solventless extracts do not use butane or any other solvent to extract the cannabinoids and terpenes from the cannabis. Different techniques are used to either create solventless products such as “washing” cannabis buds or pressing rosin.

Rosin is a solventless extract because it does not rely on the use of any solvents like butane to extract the concentrate. By applying heat and pressure to either cannabis flower or hash packed into rosin bags, extractors can get a product that maintains the terpene and cannabinoid profile of the original plant, but in a much more potent form.

Full melt hash is a collection of isolated trichomes of the cannabis plant. Trichomes contain the plant’s cannabinoids and terpenes.

How to Take a Dab

To take some dabs you will need a few things. The first of which is dabs! Then you will need a dab rig, a nail, a carb cap, and a torch. The nail (commonly called, banger) can either be titanium or quartz. Many use quartz as it provides a superior flavor. Titanium tends to hold heat longer allowing for the full product to be vaporized without doubt. A carb cap, when placed onto the bucket of the nail creates convection heat to vaporize the concentrate.

By trapping in the hot hair and applying directional airflow to the dabs, a carb cap can help you get the most flavor and vaporization from your dabs. A torch is needed to heat up the banger unless you are using an electronic nail (e-nail). Finally, you will need some cotton swabs to clean up the banger because a clean banger is a happy one. Keeping your nail fresh allows for better flavor and function. Let’s get into the specifics.

The OG way to dab is starting with a hot nail and placing the concentrate on there when it has cooled down to the appropriate temperature. Always be careful to not go in too hot as it will burn the cannabinoids and terpenes and be very harsh. Using temperatures between 350℉ (176℃) and 710℉ (376℃) will keep the flavor in tact while still vaporizing the full extent of the product.

When asked if they prefer to dab BHO with a traditional technique or a cold start, 82% responded that they used the traditional style. The main reason stated was so that the full dab could be consumed and none wasted. One respondent to our survey, @mmmp_empire_genetics on Instagram said he has no problem getting “more flavor” from a traditional dab and he finds that cold starts are too inconsistent and just do not do the trick (@mmmp_empire_genetics). Big dabs, big clouds, happy dabbers. The video below shows the process of taking a dab in the traditional style.

Using the torch, heat the nail up for approximately 30-45 seconds.

With the banger heated up, place any pearls/balls in the banger. The pearls/balls agitate the dabs and allow more surface area of the banger to be in contact with the concentrates, making it more efficient.

Wait for the nail to cool to an acceptable temperature, about 350℉ (176℃) and 500℉ (260℃). When not using a temperature gun, try looking up how long others wait for specific nails to cool down. It is usually between 30 seconds and 1 minutes and 15 seconds.

With the dabs in the hot nail, place the carb cap on top and start inhaling.

How to Do Cold Start Dabbing or Reverse Dabbing

Recently, cold start dabbing has gained some popularity as a way to better preserve the terpene flavor of the concentrate being dabbed. Some even say it is a less harsh way to dab. For cold starts you will need a quartz nail. Compared to BHO, the split between a traditional dab and a cold start was much closer when dabbing rosin or full melt. About 62% of respondents stated they cold start rosin and full melt dabs. Terpene preservation was the main reason stated.

Lower temperatures better preserve flavor, but you may not use all of the dab. As some would say, “you’ve got to waste it to taste it”. Using lower temperatures is also easier on your equipment like the quartz nail. Your nail will last a long while through proper cold start technique. The following video details the steps you would take to give yourself or friends the perfect cold-started dab.

With the banger cold, place your dabs and any pearls/balls in the bucket. The pearls/balls agitate the dabs and allow more surface area of the banger to be in contact with the concentrates, making it more efficient.

Place the cap on the nail.

Using the torch, heat the banger on all sides and the bottom as evenly as you can for about 7-12 seconds to activate your cold start dabbing. If you see the dabs begin to  vaporize then you have heated it up enough! A lower temperature dab will have more flavor, but less is vaporized and a short reheat may be required.

Pros & Cons of the Cold Start Dabbing or Reverse Dabbing