The Complete Guide: How to Press Flower Rosin 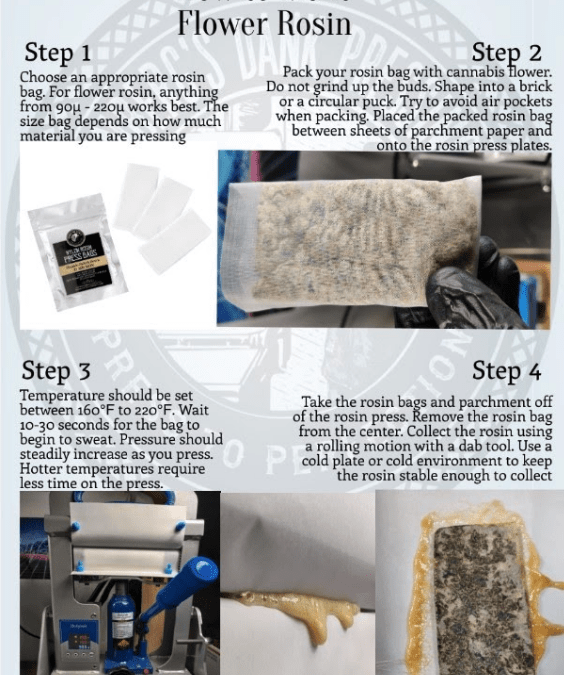 To make flower rosin, high quality cannabis flower is placed into a rosin bag. A rosin press applies heat and pressure to the rosin bags. The rosin bag is made of a fine nylon mesh screen and will hold unwanted plant material inside while allowing cannabinoids and terpenes to flow out.

The success of any rosin press has to do with which rosin bag to use, how much heat is used, and how much pressure is applied. Rosin bags from 90µ – 220µ are best for flower rosin. The average temperature used to press flower rosin is about 190℉. Pressure should steadily increase as you press.

The little things can make a big difference so we asked some experts about their particulars. The more you press rosin, the more of a feel you will get for the intricacies. As one of our experts said, “Each plant and honestly each bud is going to react differently on the press so it’s really just knowing what your material is going to produce and act accordingly” (PGS). Let’s get into How to Make Flower Rosin.

In the cannabis field, rosin is a solventless extract that is considered to be top tier compared with other cannabis concentrates. Shatter, live resin, diamonds, and sauce are all considered Butane Hash Oil (BHO) because they require the use of a solvent (such as butane) to create. Rosin does not use any solvents. Because there is no chance of residual solvents in the end product, rosin is considered to be of the utmost purity.

The flavor of rosin is also top notch because of the high levels of terpenes (the flavor center of cannabis) in the end product. Rosin can be made from either flower or hash. Take a look here to learn How to Press Hash Rosin. This article will focus on How to Make Flower Rosin. Let’s dive in.

How to Press Flower Rosin

The quality and yield of your flower rosin depends on your technique and quality of the flower you begin with. High quality flower at proper levels of humidity can be made into great rosin. As they say,

Although the process of learning how to press flower rosin is not overly complicated, it is the little things that can make the difference between top quality flower rosin and everything else. Prepping the flower, choosing and packing the rosin bags, choosing an appropriate temperature, and applying pressure all play a part in the yield and quality of your end product. As with most things, practice makes perfect. You will develop more of a touch the more you press flower rosin.

This article will go over the details of a successful flower rosin press. We will also share knowledge from some talented flower rosin makers. In general, this is how to press flower rosin:

How to Press Flower Rosin: Materials

How to Press Flower Rosin: Choosing Your Rosin Bag

When temperature and pressure are applied, rosin bags are meant to hold in the plant material while allowing the cannabis rosin to pass through the fine nylon mesh. The mesh is measured in microns (µ) which is the same as one-millionth of a meter (a meter is about three feet for all the non-metric system users). Cannabinoids and terpenes are smaller than the micron spaces and can pass through the bags while unwanted material is held inside. Flower rosin usually requires relatively higher micron bags (90µ – 220µ).

As with most decisions, each has advantages and disadvantages. Lower micron bags, around 90µ, may yield higher quality rosin because the smaller micron spaces only let the purest rosin through. On the other hand, you may sacrifice yield because the smaller micron spaces allow less material to pass through. One of our flower rosin experts, Philly Grown Solventless, uses 120µ bags for “the best medium between bag durability and yield while maintaining quality”.

The dimensions of the rosin bag you choose is dependent on how large your rosin press is and how much material you are pressing. A popular size is 2×4 inches. Our friend Rosinberg has always used 2×4’s for his presses. He has found his “personal sweet spot for flower to be between 3.5g to 5.5g”. Obviously, more flower will require larger bags. Philly Grown Solventless presses up to 28 grams at time and uses 2.25×7 inch bags. The size choice is also due to the fact that his rosin press plates are 2.5×6 inch and he wants to use as much of the area as possible. Now, let’s get into the best way to pack your rosin bags.

How to Press Flower Rosin: Packing Your Rosin Bag

As the old saying goes, there’s more than one way to pack a rosin bag. But it does not matter how you pack the bag if you are beginning with below average flower. High levels of THC will yield better and more rosin than flower with lower levels of THC. Rosinberg prefers fluffier buds because they have more surface area for trichomes to rest on.

Relative humidity of the flower is crucial for a successful press. Dry buds may not yield much and what they do yield could have a burnt taste. Wet buds also risk lower yields. You can purchase humidity packs online and use them to add humidity to your flower. While Rosinberg prefers the buds to be at about 62-65% relative humidity, another flower rosin expert, Erik Asher likes them a bit more wet, at between 68-75% relative humidity. The exact level of humidity you choose is up to you. As you press more flower, you will develop a feel for your personal preference.

With proper flower ready to go, it is time to pack the rosin bag. It is not suggested that you ground up the flower, but rather break it into smaller popcorn nugs and remove stems. Filling the bag evenly allows pressure to be evenly applied when pressing the rosin. Try to avoid air pockets between buds as they could cause issues. Some, like Philly Grown Solventless, use a pre-press mold to pack the flower into a tight brick or puck  that can easily fit into the rosin bag. It is suggested to leave about half an inch of room at the top of the rosin bag to fold over and hold the flower in.

Once the rosin bag is filled, cover the rosin plates with two sheets of parchment paper and place  the rosin bag at the center of the rosin press plate. This ensures the bag will receive even pressure throughout. There are two ways you can place the bag. You can go with the classic horizontal brick style by folding the end flap of the rosin bag over and laying the rosin bag flat on its side.

Make sure the end flap stays folded over or you might have some flower bust out of the bag! You can also place the rosin bag right-side-up and fold the top to close it. This vertical cylinder method is called Bottle Tech Style (BTS) and it is the preferred method for Erik Asher. BTS decreases the surface area of the rosin bag on the plates and allows for better control of the pressure applied when pressing.

How to Press Flower Rosin: Setting a Temperature

For pressing flower rosin, temperatures usually range from 160℉ to 220℉. Lower temperatures may produce a better tasting rosin and higher temperatures can maximize yield. As you press more often, you will develop a sense for the temperatures you like to press at. Erik Asher presses at 200℉ because he feels “you lose too much yield at lower temps with no improvement in quality”.

Equally as important as temperature, is how long you keep the rosin bags on the heat. Too long and you may burn the product, not long enough and you sacrifice yield. Rosinberg explained to us the relationship between time and temperature. Higher temperatures need less time on the press to avoid any burning of the product. A press at 180℉ could last between 3-5 minutes total, while a press at 220℉ may only be good for about 90 seconds.

We suggest placing the rosin bags on the heated rosin press without applying any pressure for about 30-45 seconds or until you see the bags begin to look wet. This preheat can be extremely useful when you begin to apply pressure.

With your rosin bags packed and on the heated-up rosin press, it is time to apply some pressure. How and when pressure is applied is a very personal choice that everyone varies on a little bit. The general technique is to go low and slow. Rather than crank you pressure all the way up right away, it is best to steadily increase pressure over the course of the press. Rosinberg says to

“Go SLOW, and I mean your arm hurts slow”- Rosinberg

He noted that sometimes the rosin can budder up quickly, clogging the spaces in the mesh of the rosin bag and blocking material from flowing through. A steady increase in pressure will keep the rosin flowing.

Rosinberg usually tops his pressure at 1650psi for 5.5 grams, but many who make flower rosin do not rely on a pressure gauge. They rely on feel and signs from the rosin’s appearance. As he steadily increases pressure, Erik Asher watches the extraction rate and the color of the rosin. If the extraction rate “slows down significantly and/or [he] sees a darkening of the color of the rosin” then the press is over and he takes the rosin bags off the rosin press. When the color darkens, terpenes may be burning and that is not what you want.

Once you are done with your press, it is time to collect that sweet, sweet rosin. Working in a cold environment or using a cold plate helps to keep the rosin stable and easy to collect. Room temperature will be fine with quality rosin. Take your dab tool and roll it over the flower rosin. The rolling motion of the tool will pick up and neatly collect the flower rosin.

If the rosin is more of a shatter-like consistency, using the tool may shoot shards all over the place. Instead you can wear a non-stick glove and use your hand to press on the rosin and gently lift it off the parchment paper. You could also use a heating plate to make the consistency less shatter-like and then proceed to collect with your dab tool.

Saucy rosin can be difficult to collect because it does not have a stable state. Using something to scrap the rosin off the parchment paper and into a container may work better than a dab tool. You can also just keep it on the parchment as a last resort.

Rosin is best stored in an airtight container so the flavor does not diminish. Used rosin bags (called rosin chips)  can be saved and eventually made into edibles as well!

Doing a little post-processing to your rosin can really bring out the flavor and create new consistencies. Whipping the rosin (running your dab tool through it over and over) adds air to the rosin and can help to budder up your rosin. Curing rosin is the practice of letting the rosin sit for an extended period in either a cold, hot, or room temperature environment. Cold-curing usually results in a more badder-like consistency. A hot-cure can make the rosin a bit more saucy. As with every other aspect of pressing flower rosin, It really comes down to personal preference. Happy rosin pressing! We hope this was a great guide for you on how to press flower rosin!