The Complete Guide: How to Press Hash Rosin 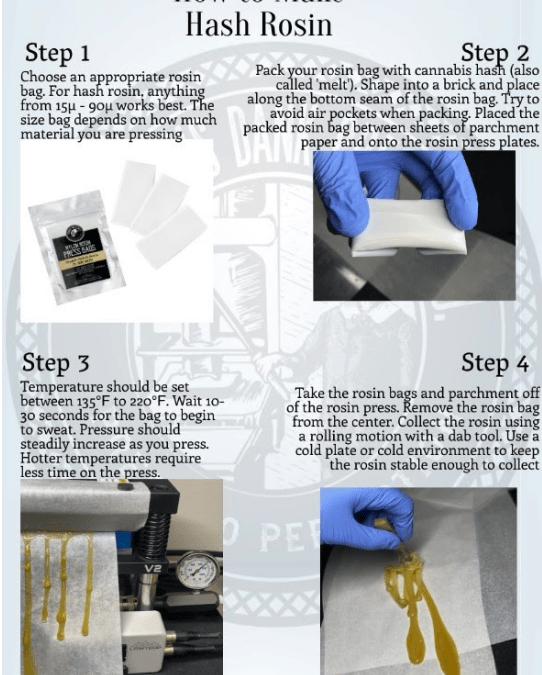 Rosin is a solventless cannabis extract that uses only heat and pressure to create. Many find rosin to be superior to other cannabis concentrates because of the purity, the flavor, and the ability safely to make it at home. Rosin can be made from cannabis flower or from hash. In this article we cover How to Press Hash Rosin.

You will need hash as a starting material, a rosin bag, parchment paper, a rosin press, a dab tool for collection, and a jar for storage. The rosin bag is filled with the hash then placed on parchment paper between the rosin press plates. The plates then apply heat and pressure to extract the rosin.

Which rosin bag to use, how much heat to apply, and how much pressure to use are all questions you will need to answer before pressing. Lower micron bags can increase purity of the end product, but you may sacrifice yield. Usually 15µ – 90µ rosin bags are best for hash. Too much heat may give the product a burnt flavor and too little heat will not produce a high yield. About 190℉ is the average temperature for hash rosin pressing.

The more you press rosin, the better a feel you will get for all the variables. Beginning with less starting product is a good way to practice so you do not lose too much if there are any mishaps.

Now Let’s get into how to press hash rosin…

The term “rosin” refers to a process of applying heat and pressure to starting material, therefore extracting the resin of the material. You can rosin cannabis flower to make flower rosin or you can rosin hash to make hash rosin. Rosin products are created without the use of solvents, unlike shatter, crumble, live resin, diamonds, and other cannabis concentrates. These are known as BHO products (butane hash oil) because they are extracted from the cannabis plant using a solvent, most commonly butane.

Many find the purity of rosin products to exceed that of BHO products because of the chance of residual solvents making their way into the final product. The flavor of rosin products is also considered to be superior to other cannabis concentrates because of the retention of terpenes (the flavor center of cannabis) when pressing rosin. As we mentioned, rosin can either come from cannabis flower or from hash (hash can also be referred to as “melt”). You can see how to make flower rosin on our blog. This article will cover how to press hash rosin.

How to Press Hash Rosin

We will begin by saying that not all rosin has the same quality, flavor, and potency. Differences have some to do with technique and a lot to do with your starting material. As they say in the rosin field, starting with great material makes great rosin. Or more simply put,

The process of pressing rosin is not overly complicated, but the little things are what makes the difference between bad rosin, good rosin, and great rosin. Things like how you pack the rosin bag, the temperature you press at, and how you apply pressure all have dramatic effects on the end product. Pressing rosin is definitely a skill that requires practice to develop your touch on the press. In this article we will get into the details of a hash rosin press and get some inside info from some very talented hash rosin makers. In general, this is how to press hash rosin:

How to Press Hash Rosin: Materials

How to Make Hash Rosin: Choosing Your Rosin Bag

Rosin bags are made of finely woven nylon to create fine screens. The rosin bags, when used to press rosin, hold the plant matter inside the bag and let out the pure cannabis extract, free from contaminants. The plant matter is larger than the spaces in the fine mesh screen rosin bag and therefore cannot pass through. The cannabinoids and terpenes are smaller than the spaces and can pass through. The size of the space is measured in microns (µ) which is one-millionth of a meter, pretty small.

Choosing the right micron bags is a very important first step in pressing hash rosin. Typically, smaller micron bags (15µ – 90µ) are used for hash pressing. The smaller the micron, the finer the screen. As with everything in life, there are advantages and disadvantages to every decision. Choosing a smaller micron can yield some great quality, but you make sacrifice yield.

We asked MegaRaw Melts, a popular hash maker from Maine, about his rosin bag choice. He uses a technique called Double Bag Tech by which he uses a smaller micron bag (37µ) to put the hash in, then puts all that inside a second, outer bag (90µ). Another popular bag combination is using a 25µ inside another 25µ bag. Using double bag tech provides additional stability when applying pressure to the bags, helping to avoid any blowouts. Blowouts happen when so much pressure is applied to the bags when pressing, that they fail and some of the material inside the rosin bag seeps out when it should stay in.

Choosing which dimension the bag should be mostly depends on how much hash you are pressing. More hash needs a larger bag and less hash does not need a large bag. For example, MegaRaw Melts usually works with 2.5×4.5inch bags and fits between 14 and 21 grams of hash per bag. Now let’s talk about how to pack the rosin bags.

How to Press Hash Rosin: Packing Your Rosin Bag

Packing rosin bags is a very personalized process that takes time and practice to find your perfect technique. One consistency we found from all our hash-making experts was that rather than filling the rosin bag with loose hash, they form the hash into a brick shape before putting it into the bag. With the melt in the shape of a brick, hash-maker @HeadyHoarder then flips the rosin bag inside out to better align the melt to the bottom seam.

The bag is then flipped back so the melt is at the bottom of the bag. You want an even distribution of melt through the bag to avoid air pockets that could make the pressure applied to the melt uneven. It is not suggested to fill the bags up entirely. There needs to be room at the top to fold the bag over and prevent the hash from seeping out when pressure is applied. Usually about half an inch is enough to safely fold the bag and prevent blowouts.

If you are using Double Bag Tech, the seams of the outer bag should line up with the inner bag. This has been the most successful method we have found thus far.

How to Press Hash Rosin: Setting a Temperature

Ok so the hash is in the rosin bags and you are ready to make some rosin! Now we need to utilize a rosin press which is a device that heats up two plates and uses hydraulic pressure to push the plates together. Your packed rosin bags go between the heated plates. Lining the plates with parchment paper is a must so when you squeeze the rosin from the rosin bags, it does not get stuck to the rosin press plates.

Rosin bags packed, parchment paper in place, rosin press heated up, it is time to apply some pressure and make some rosin! The more you press rosin, the better feel you will get for applying pressure. There are several variables including the amount of hash you are pressing, the size bag used, and the temperature being pressed at. Most agree the best method goes by a simple saying,

Beginning with minimal pressure to let the rosin bags heat up can be an effective technique. When the rosin bag looks “wet” and begins to “swell up”, that is when to start steadily increasing pressure (@HeadyHoarder, MegaRaw Melts). The press should not last longer than 3 minutes and can be as little as 90 seconds. Some apply up to 10 tons of pressure by the end of a press, others cap out around 3 tons. Again, the more you press rosin, the better feel you will get for when, how long, and how much pressure to apply.

Rosin press complete! Now to collect that sweet sweet hash rosin. First and foremost, you want to keep the rosin’s temperature down to about room temperature. This is for two reasons. The first is terpene preservation and the second is these temperatures keep the rosin stable and easier to collect.

Depending on the consistency of the rosin, there are a couple methods you might use to collect. You can use a regular dab utensil and gently roll the rosin off the parchment. If the rosin has a more shatter-like consistency, using a dab tool can be messy and inefficient. Instead, you can wear a non-stick glove and use your hand to collect the rosin (MegaRaw Melts).

In the end, rosin is best stored in an airtight jar to keep the flavor and consistency fresh. You can also keep the used rosin bags (called rosin chips) and when you have a nice collection, make them into edibles!

Curing can give your rosin a little extra something to make it special. Running a dab tool through the rosin adds air and agitation which can change the flavor and consistency of the product. This is called “whipping” the rosin.

Placing rosin in a cold environment like a refrigerator is called “Cold Curing” usually makes the rosin into a more badder-like consistency. Higher temperatures can be used to cure the rosin in a more saucy consistency. You can even cure at room temperature. Each method will produce different results and those results may vary based on your rosin. The jury is still out on whether Cold-curing or Hot-curing is better for flavor. To each their own, happy rosin pressing. Hopefully this was a fantastic guide for you on how to press hash rosin!