The Different Types of Cannabis Concentrates 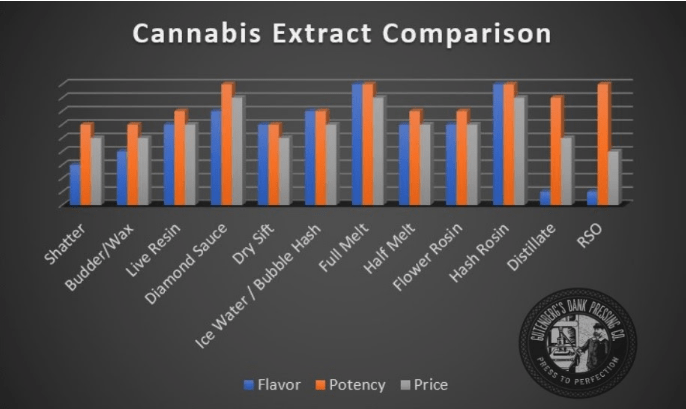 When we talk about the types of cannabis concentrates and extracts, we refer to what many call “dabs”. Dabs are all the makeup of the cannabis plant, including cannabinoids and terpenes, extracted from the plant. Cannabinoids like THC, CBD, THCa, and more are molecules that interact with your body to produce the benefits cannabis can provide as well as that feeling of being ‘high’. Terpenes are the flavor center of the plant and certain ‘terps’ may have some medicinal properties as well.

So when someone is describing their dabs to you, they will go over three (3) key points. These are:

The starting material refers to the input of the extraction process. This could be nug run flower, trim, fresh-frozen, or bubble/ice water hash (referred to as ‘hash’). The different processes are described in the next section, but some examples are BHO and rosin. There are a large number of consistencies that could describe your ‘dabs’ including, shatter, budder, rosin, etc. For example, if your friend has some “Straw-nana Hash Rosin Budder”, they are referring to:

Butane hash oil uses . . . you guessed it, butane to extract the cannabinoids and terps from the cannabis. The process involves passing a solvent like butane through the starting material. The solvent strips the starting material of its cannabinoids and terps. Next, the solvent is purged from the extract, leaving behind the cannabinoids and terps. As with any process involving solvents, there is always a danger that there could be some residuals leftover, decreasing the extracts purity. Besides butane, some products may be extracted using propane or CO2, although these types of extracts are not very common. Consistency-wise, BHO can take many forms. Let’s discuss a few.

Probably one of the most known types of cannabis concentrates. Shatter is a glass-like consistency that is quite popular because of affordability and relative  ease of producing. Once fully, purged off all the solvent, the extraction is poured flat onto a sheet and left to settle into a translucent, hard consistency. Shatter can also be a bit softer and referred to as “pull-and-snap” because of how a single dab is pulled and snapped away from the sheet of shatter. The flavor of shatter can be hit or miss depending on the starting material (trim or full nugs) and the quality of the flower used.

Wax, sometimes referred to as Budder and sometimes as crumble, describes a consistency that is like butter or icing on a cake. These types of cannabis concentrates can appear almost moist as a result of whipping the purged extract at a low heat temperature. Aerating the extract like this creates the opaque, soft, buddered product. The extract steps in the process usually means extra cost, but the flavor can be well worth it.

Live Resin products use a starting material that was frozen, fresh from the harvest, without any curing. This allows the plant to retain all the fresh terpenes that can later be extracted. Freezing the material freezes the trichomes that contain cannabinoids and terps, allowing them to be collected cleanly. The result is generally very tasty and quite potent. Definitely one of the most tasty types of cannabis concentrates. The process of extracting frozen material opposed to cured flower is more involved and complicated. This increases the price of these types of cannabis concentrates to consumers.

Sauce and recrystallized diamonds are some of the most sought after BHO products on the market. The diamonds and sauce are a separation of the cannabinoids (diamonds) and sauce (terpenes). To make these types of cannabis concentrates, extractors do not fully purge the live resin shatter, to leave it a bit soupy. The extract is placed in an airtight jar and left to separate for 2-3 weeks. Then it goes through a final purge to remove any residual solvents and voila!

The most common crystallized cannabinoid is THCa. This is a precursor to THC and it will become THC when heated (chemically known as decarboxylation). These diamonds can be 100% pure THCa! The price tag of diamonds and sauce is usually steeper than other BHO products because of the intensive process involved to make it, the superior flavor profile, and the high potency.

As mentioned above, products made without the use of solvents are concentrates. SHO stands for “Solventless Hash Oil”. There are several methods of solventless extraction. Mechanically separating the cannabinoids and terpenes from the starting material can involve ice water baths, heat, pressure, and fine mesh bags (rosin press bags or bubble bags). All solventless extraction methods can also be done at home as there is no worry of combustion from the solvents. Let’s get into the specifics.

Dry sift, more popularly known as kief, is the result of mechanically separating cannabis trichomes from the plant. To collect the trichomes, the cannabis flower is put through fine screens repeatedly. As you progress, finer and finer screens can be used. There are a few varieties of trichome, all carrying in size. Screens range from around 25 microns to 160 microns in size. For reference, the width of a strand of hair is averagely 75 microns. The finished product resembles fine grain sand and is usually quite tasty because of the terpenes found in the trichomes. Depending on the quality of the starting material, dry sift can be priced in the middle range of cannabis products.

Ice Hash (also known as Bubble Hash) is named because of the process used to separate the trichomes from the cannabis plant. In a bucket, fine screens, like those used to make dry sift, are placed in a bucket with a lot of ice and cannabis flower. The colder the bucket, the more likely the trichomes will freeze and break off. This technique is sometimes referred to as “washing”. Once the flower has been washed and strained and dried, what’s left is a very potent and tasty extract. The term “bubble” refers to the bubbling that should happen when the hash is smoked.

The name “Full Melt” comes from how the product is smoked. Melt can be either dry sift or bubble hash, the “full” in “full melt” describes how, when dabbed, there should be no residuals leftover. Half melt, when dabbed, will leave behind some residual plant matter. In the cannabis community, there is a star rating system for hash, 1-6 star. Full melt would be 5-6 star and half melt 3-4 star. Anything less is not the best quality. Full melt hash is loaded with flavor and potency as it is close to pure trichomes. This also makes it relatively pricey.

To some, this is the most beautiful types of cannabis concentrates. To rosin something is to apply heat and pressure to perform an extraction. In the case of cannabis, applying heat and pressure to either flower or hash produces a solventless treat that many consider the top tier cannabis extract. To make flower or hash rosin, extractors place the starting material into rosin bags. The bags are usually nylon and come in varying micron sizes. The smaller the micron, the smaller the holes are that the extract can seep out of.

Rosin products are known to be superior in flavor and potency because of the retained terpenes and cannabinoids. The price usually reflects that. Many cannabis users have started making their own flower or hash rosin at home. All it requires is a rosin press (heat and pressure), rosin bags, and starting material.

Distillate oil is a viscous oil that contains upwards of 90% pure cannabinoids and is usually flavorless and volatile chemicals (terpenes) have been removed from the product. The process to create distillate involves using varying temperatures to remove fat and lipids as well as isolate cannabinoids (winterization and decarboxylation). The color is usually a translucent honey amber.

Rick Simpson Oil was created by an important cannabis-advocate name Rick Simpson (who would have guessed that). The process is similar to that of both cannabutter and BHO extracts. Mixing cannabis with a solvent, like isopropyl alcohol,strips the plants of the cannabinoids. Next, the solvent is strained to remove any large cannabis bits. It is then heated to remove the solvent and leave behind the RSO. The color will be dark and the product itself will be quite thick. Flavor is not the best with RSO, but potency and ease of making it make RSO quite popular.